Note: Most boards are made with a combination of bottom contours. 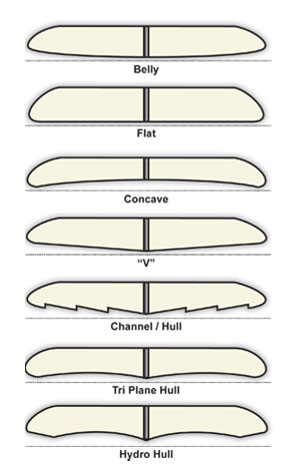 Belly – A convex planing surface is the most inefficient. The convex curve plows through the water and parts it, allowing it to escape off the rail. Belly is usually used as an aid to control. It will give a smoother ride in choppy conditions because rather than slapping against the water it will part it. In big or fast surf belly allows the surfboard to roll or lean from rail to rail easier, which is essential for control at high speeds.

Flat – Flat bottoms plane up on top of the water making them efficient and responsive. They are quick and loose in small or mushy surf. Once higher speeds are reached, flat bottoms are a bit more difficult to initiate turns with, and tend to skitter or slide when turned hard.

Concave – The purpose of a concave bottom is to contain water flow down the length of the board. The water under the wide point is necked down and squeezed out in the tail area, which brings the venturi principle into play resulting in more lift. The addition of concaves can either remove or add rocker depending on their placement. Rocker must be adjusted accordingly so that desired performance characteristics are maintained. Concaves are a potent design feature and can cause a board to track and feel stiff to delicate adjustment in line if utilized improperly.

“V” – Angled “V” on the bottom works very much like belly, but is a flat plane rather than a convex curve. Usually belly is found on the forward 1/3 of the board and “V” is found on the rear 2/3. “V” is essential to loosen up the tail area at high speeds. “V” increases the rocker at the rail line, which makes the board turn more easily. Many surfers experience a feeling of added projection out of turns on boards with pronounced “V”, which may be attributed to the “V” allowing them to turn harder, with the flat planes maintaining an efficient planing surface. Increased “V” makes a board easier to lean.

Channel / Hull Bottom – The channel bottom consists of a series of flat planes (usually 2-8 in number) that are angled in a concave configuration. The main advantage to this design is that it directs waterflow down the length of the channel. Since the channels are parallel, the water isn’t being compressed as it is in the full concave. The channel bottom design provides the advantages of a full concave without the disadvantages of being stiff or tracking. The concave configurations of these planes contain and direct water down their length when a turn is made instead of letting water escape off the rail. More of the energy put into the turn is utilized and converted to forward thrust. As a rule, longer and deeper channels give maximum effect while short and shallow channels are more subtle.

Special attention should be paid to the corners of the channels to make sure they are benefiting from a full strength glass job.

Tri Plane Hull – The tri plane hull was developed by Al Merrick and consists of a shallow concave on each side of the stringer that extends from the center of the board to the fin(s). Added lift is created as water passes diagonally across this contour, similar in action to water rushing over a stone in a stream. The effect of the tri plane hull is similar to channels but more subtle. Channels have more directional sense, producing more drive and projection out of turns, but the tri plane hull is quicker in leaning edge to edge.

Hydro Hull – The hydro hull adds a double-edged rail and subtle double concaves to a bottom with increased “V”. The beveled rail facilitates release yet maintains a nose to tail edge for bite and projection. The forward edge of the rail is the widest point of the hydro rail. This is also where the subtle double concaves start. The double concaves create lift (improving planing efficiency) and remove rocker curve, which creates a straighter, faster rocker. The improved planing efficiency of this design allows narrower template dimensions to be utilized. Decreased width, coupled with increased “V”, improves quick response in rail-to-rail transitions.