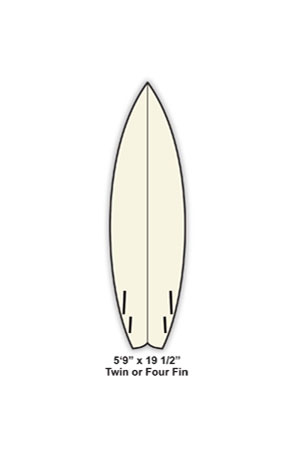 Four Fin: A shortboard (usually 5’8″ – 6’8″) the four fin adds fin area to eliminate the drift and slide characteristic to twin fins. The four fin utilizes a wide tail for efficient planing (and enhanced maneuverability) at low speeds. Two fins near each rail provide control during radical turns. The four fin provides more drive and projection than a twin fin and is looser rail to rail than a tri fin.

Purpose: The four fin design places fins near the rails where they can do the most good when the board is leaned on edge. The forward set of fins are further up than they would be on a twin fin and smaller. The rear set of fins are inboard and behind the front set. The rear set is shorter, so that even tough they are closer together than the forward set, they still leave the water when the board is leaned on edge. The four fin is more positive and has more drive and projection out of turns than a twin because it has more fin area in the water. The four fin is looser and goes edge to edge quicker than the tri fin because the center fin on the tri fin always remains in the water.