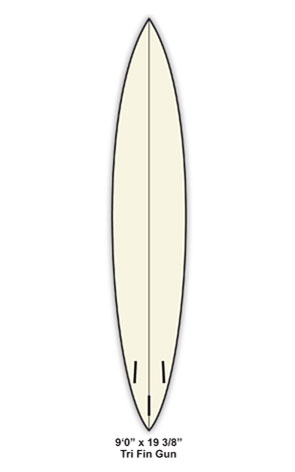 Gun: A big wave board made for waves eight-feet and larger in single or tri fin configurations. A common misconception is that the gun board is the fastest design of all. Actually, gun boards are built for control utilizing design features that are inherently slow. In addition to longer overall lengths, guns utilize proportionally narrower templates, increased rocker, softer rails and substantial amounts of “V” and belly to maintain control in the higher speeds common to larger surf.

Purpose: The gun board is made to deal with the higher speeds, chop, bump and currents common to larger surf. The longer length makes paddling easier and allows you to get into waves earlier. It also increases the length of the rail line (edge of the surfboard) so there is more edge in the face of the wave. The narrower template dimensions reduce planing area, improving stability at higher speeds and enhancing control on steep drops. Increased rocker, softer rails, “V” (in the tail) and belly (in the nose) make the gun easier to lean on edge and turn at higher speeds.