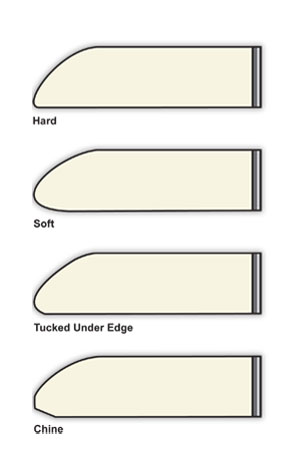 Rail – The outside edge of the surfboard.

Function: Fuller rails carry more foam. This aids response because of resistance to sinking and stalling when leaned on edge. Thinner, tapered rails carry less foam, making them easier to sink and lean on edge. The harder the edge, the cleaner the water breaks away and releases from the board, which contributes to speed and looseness. Hard rails penetrate the water poorly at high speeds and resist being leaned on edge. Softer rails provide a smoother, more forgiving response than hard rails. the water tends to bend around their subtle curve rather than breaking away. The bigger the waves you want the board to work in, the softer the rails should be. A very popular design feature is the tucked under edge. This design you the clean water release of a hard rail with the penetration and holding power of a softer rail. Hard rail edges are utilized in the tail area for improved release with control maintained by the fins. Chine rails utilize an additional ridge or edge that improves the shapers ability to control the bite and release points of a rail. Most boards use a combination of rail configurations.that energy is available, they become a necessity.