Almost any tail design can be blended into any template. Many of the designs have very subtle influences on performance. When looking at tail shapes, remember that curves hold water flow whereas corners allow water flow to break away. The tail width is usually a more accurate indication of board performance than the tail design.

The narrower and more pointed tail designs have a longer, more drawn out turning characteristic and are oriented for faster, larger surf. The minimal planing area is essential to control at high speeds but causes sluggish response, drags, and turns poorly in small or slow surf. A wide, full tail has a great deal of planing area, which suits it to small and slow surf. Greater tail area aids in paddling, planing, flotation, and wave catching ability. Wide tails will do sharper pivotal turns with very little projection. They are very loose because their great planing area keeps them from sinking and dragging. 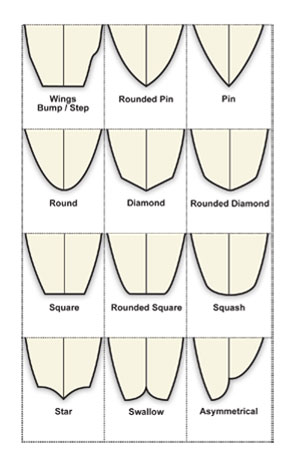 Multi-fin systems are utilized to keep wide tails form spinning out. Wide points have moved back and tail widths have been proportionally increased as multi-fin systems have proven their ability to maintain control. Increased tail area and multi-fin systems have helped create equipment that is fast, loose and positive. Wide tails are an advantage in small or slow surf because their increased width improves planing efficiency. A variety of multi-fin systems are utilized for smaller surf, with the tri fin a strong favorite. For larger surf the superiority of the tri fin is unrivaled, though debate persists on the advantages of tri vs. single fin on narrow tailed Wiamea guns.

Wings / Bump Wings / Stingers – Wings, bump wings, and stingers are shifts in the template that alter the rail line. They vary in placement, as well as in how pronounced they are. The shaper can use them with any rail design to set up a break/pivot point in the rail line that will loosen the board’s turning characteristic.

Wings are small, pronounced (almost 90 degrees) shifts in the rail line that are typically placed anywhere from 3″-15″ form the tip of the rail. One, two, or three pairs of wings can be used with any tail design to enhance maneuverability. Wings allow shaper to utilize the loser turning characteristic of the wider tail ahead of the wings with the holding power of the narrower tail immediately following them. Wings break / shorten the length of the rail line which makes the board looser. Wings are rarely utilized on boards for larger waves because they create a point in the rail where water breaks away, which compromises control at higher speeds. Bump wings are smoother and more subtle than wings. They appear as slight bumps or exaggerated transitions in the template curve. Bump wings are designed to maintain water flow along the rail so that the water bends into a narrower tail rather than breaking away. Stingers resemble pronounced wings that are placed approximately 1/3 (the board length) up form the tip of the tail, where they act as a pivot point between the front rear and rear foot. Stingers break / shorten the length of the rail line to create a looser more pivotal turning characteristic. Like wings, the use of stingers is typically limited to boards designed for smaller surf, where the increased looseness they provide won’t compromise control.
Rounded Pin Tail – The standard. This is the tail by which all others are judged. The rounded pin is a very versatile tail. It is very smooth in rail-to-rail transitions and holds-in well.

Pin Tail – The big wave, full race version of the rounded pin. Pintails have a minimum amount of area. This is why they hold in well at high speeds in big surf. A no-compromise solution to control at the higher speeds common to large surf.

Round Tail – A very smooth turning tail that has a bit more area than the rounded pin. The extra area makes it more suitable for slower, smaller surf.

Diamond Tail – The corners of the diamond tail makes its turning characteristics a bit more pivotal and sharper than the rounded pin.

Rounded Diamond Tail – A diamond tail with rounded corners that is very similar t a rounded pintail or round tail in design and performance.

Rounded Square Tail – The rounded squaretail is a subdued version of the squaretail. It is somewhat less responsive. The turn it carves is not quite as sharp and pivotal because of its rounded corners.

Squash Tail – The squash tail is very similar in appearance to the rounded squaretail – performance will be very similar.

Swallow Tail – The swallowtail is basically two pintails side by side. The swallowtail design couples substantial tail area with the control of a pintail. The area it contains is very close to a squaretail but the individual pins hold in much better when the board is turned hard.

The only problem with swallowtails is that in radical changes of direction the tip of one side must be disengaged totally before the tail will pivot freely on other pin. This makes for a tail that tracks or is somewhat stiff in transitions from rail to rail. The swallowtail will feel totally positive when banked and committed, but when direction and rail is to be switched, a hesitation in the transition from one pin to the other can be noticed.

Asymmetrical Tail – Most surfers draw different lines when surfing backside than they do frontside. Their frontside style may be more driving and down the line. At the same time their backside style or the wave they usually surf backside may demand a more vertical up and down attack with lots of cutbacks. The asymmetrical tail allows the surfer to choose the type of tail most suited to his front and backside styles and the types of waves he rides most often.