Whenever possible, measure all dimensions on the bottom. Shapers plot measurements and template curves on the bottom when designing a board. Since the bottom is flatter than the deck, one can sight the outside edge of the rail with greater accuracy.

It is difficult to isolate and compare various design features of a surfboard. As length or width change, knowledgeable shapers compensate by adjusting rocker, bottom contours, the placement of the wide point, the types of rails, and the number of fins, etc. By the use of specialized design features shapers can “set up” boards, short or long, for various conditions. A short board for large fast surf, a long board for small slow surf or visa versa. In the following examples, I’ll be comparing hypothetical boards that are set up for and ridden in the same type of surf, the only difference being the design features in question. Everything else about the boards is as similar as possible, so that you can get an idea how the particular design feature influences performance.

As you pay closer attention to the designs of the boards you ride, you will gain practical experience as to the way in which various design features influence your surfing. The ability to identify various design features and understand how they influence performance, will help you evaluate surfboards and communicate with shapers more effectively. If you are considering a new board, knowledge of design will help you pick the board that suits you best. 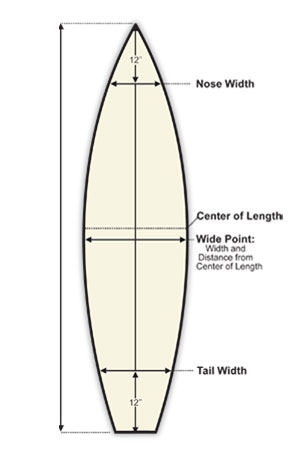 Template/Planshape – The outline curve or silhouette of the surfboard. The template should be the smoothest most flowing line that will accommodate dimensions for a specific design and length. Longer, straighter template curves which result in a template that has a more parallel nature usually result in boards that perform longer, straighter, more drawn out turns. Rounder, curvy templates are usually more suited to rounder, sharper turns.

Shorter boards turn easier, quicker and are more maneuverable than longer boards. Shorter boards fit into the tight confines of smaller waves more readily and are more sensitive to front/rear weight transfer than longer boards. One asset of this sensitivity, is that it makes it easier to negotiate steep drops in small surf without pearling. The characteristics of shorter boards enable the surfer to generate speed by quickly weighting and unweighting to maneuver through critical sections of a wave.

Width – The widest point of the template. Most boards are between 18 1/2″ and 22″ in width. Depending on the design of the surfboard, the wide point may be located anywhere from five inches behind center, to eight inches ahead of center. Function: The wider board contains more foam, which enhances floatation. Wider boards paddle easier and catch waves earlier. The increased planing area efficiently utilizes energy from small and slow waves providing more speed than available with a narrow board. The added speed improves maneuverability because the board is planing freely rather than dragging through the water.

Narrow boards have less planing area than wide boards, which suits them to big and fast waves, where there is an overabundance of energy and control is the primary design objective. At higher speeds, excessive width makes a board difficult to control. The board will skitter, drift, slide, and resist being leaned on edge. As speeds increase, planing area can be reduced–as illustrated by a barefoot water skier. Boards built for faster waves (like Oahu’s North Shore) are narrower so they’ll stay down in the water and carve; improving control at higher speeds. Narrower boards are favored by competition surfers because they go rail to rail quicker.

Nose Width – Measure 12″ from the tip of the nose. Function: The proportionally wider nose contains more foam, which provides better flotation. The board with the wider nose is going to paddle easier which will make it easier to catch waves. The additional planing area is an advantage in small or slow surf. The wider nose will resist sinking and slowing down when the surfer moves forward on the board. Extremely wide noses set up with very little nose kick and/or concaves are used for nose riding.

Narrow noses are used on big waves boards (guns) so that offshore winds won’t hang the surfer up at the crest of the wave as he attempts to catch it. Some surfers feel that the minimal mass and area of the narrow nose enhances maneuverability.

Tail Width – Measure 12″ from the tip(s) of the tail. Function: The wider tail contains more foam than the narrow tail, which aids flotation, paddling , and wave catching ability. The additional planing are a of a wide tail enhances low speed response, maneuverability, and stability. Increased planing area utilizes as much speed as possible from slow, mushy and small surf. The wider tail will feel freer, looser, and more maneuverable at low speeds than the narrow tail. As tail width (and area) is increased, additional fin area is required to maintain control. Fin area is increased by the use of a larger fin or by utilizing a multi-fin design.

The narrow tail is used on boards made for big, fast, and hollow surf where there is an overabundance of energy and control is the primary design objective. The minimal planing area of the narrow tail makes it easier to turn and more stable at high speeds. 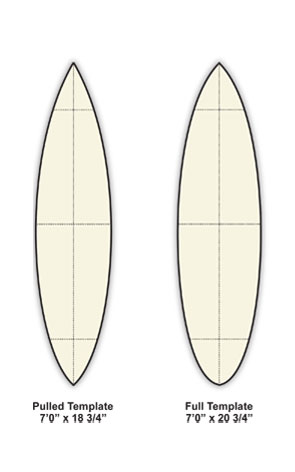 Full Template – A template that is dimensionally wider than normal. Function: Superior for beginners, very stable, suited to slow or small surf.

Pulled Template – A template that is dimensionally narrower than normal. Also referred to as a “gunny” (like a gun) template. Function: Superior for large or fast, steep surf where there is an overabundance of energy and control is of primary importance. Like a water ski, these boards don’t really feel loose (maneuverable) until they reach a certain speed. Once that energy is available, they become a necessity.