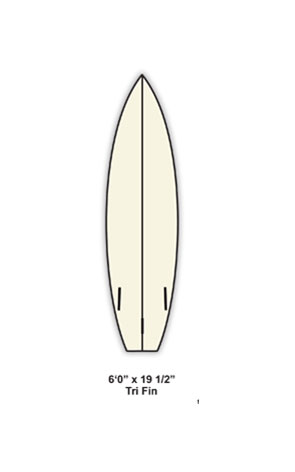 Tri Fin / Thruster: A three-fin design utilizing a specialized template. The template usually incorporates increased tail width. The wide point is located at or within a few inches of center. The nose is on the narrow side. The two side fins are toed in, canted out and placed near the rail like the fins on a twin fin. The third fin is set two to four inches from the tip of the tail. The performance characteristics of the thruster are closely associated with its specialized template. The three-fin system is being used on longer boards with narrower templates for adaptation to larger, faster, and more powerful surf.

Purpose: The thruster design evolved from the dissatisfaction Simon Anderson (Australian) had with the twin fin. When radically carving on a twin fin, because the tail is so wide, one fin gets out of the water. This leaves a wide tail with a relatively small fin area straining to control the turning force. Some feel this is the reason twins drift sideways, losing forward projection on radical turns. The thruster adds a small fin back on the tail to deal with forceful turns and improve tracking and projection. With the wide point at very close to center, the wide tail and extremely narrow nose; the majority of this surfboard’s area is directly beneath the surfer. The wide tail is very loose and fast; holding in well because of the three fins. The minimal area of the narrow nose offers very little resistance to the maneuvering surfer because there is very little weight to swing around and there are no edges to hang up. Fin location, templates, length, and rocker curves are constantly refined for various conditions. The tri-fin design has been very successful in large, powerful waves, and is the design of choice for Oahu’s North Shore.